*In stock items are dispatched within 1-3 working days, please get in touch with your event date to ensure timely delivery*

Our Own Wedding Story Holly & Nik Part 2: The Ceremony 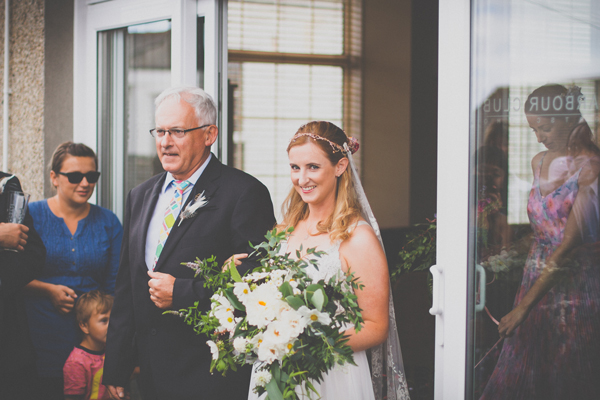 The feeling of walking into the hallway, where I couldn't see anyone but knew I was very much about to, was so strange. My heart has started beating fast again just thinking about it.
I entered the room leading to the balcony where I saw so many smiling happy faces and children playing with bubble guns (meant for the confetti throwing but far too tempting for toddlers).
The fresh breeze was welcome as I stepped out onto the balcony, holding back the tears, I saw Nik at then end, flushed with joy...and wobbling slightly.
Waiting with him was Denise from The Cornish Guild Of Celebrants. She looked almost as happy as Nik to see me! (plus half the villagers and accidental tourists, looking up towards us on the balcony from down bellow).
We stood in front of the huge arch, beautifully constructed by Elle, which framed the blue sea and the sky! I felt so thankful the weather had been kind to us and for the amazing flowers, which up until now I hadn't seen close up. And to see my handsome groom as well!
Crouton broke the spell by, on sight of Nik proceeded to squeal loudly and wet herself. Everyone found it hilarious and it was nice to start the ceremony by laughing!
Denise seamlessly guided us through our personalised, non religious ceremony. We had two readings from family members and two best men delivering a ring each. Our rings specially made by local jewellers, mine by Miri Damer and Nik's by Justin Duance. Denise asked our friends and family to vow to help support us through our marriage and ended with them repeating a Cornish saying.

Time for bubbles and hugs!

Our friends and family had travelled from all over, unlike Nik I hadn't seen most of them yet so it was a real joy to finally speak to them. I even met my baby niece Lily for the very first time!

We eventually ushered everyone down to the beach for lunch boxes, games and post wedding chatter whilst we went off for photos on the pier. Walking through the the village was one of my favourite parts of the day, it was a free pass to stop traffic and receive hugs. And we were finally alone (ish) to talk about what had just happened! It was so nice.

From the pier we could see a wave of guests had taken their shoes and socks off and were wading into the sea for a paddle! This filled us with great pleasure.
Danny took some very natural, romantic pictures then we repeated the process of stopping traffic and hugging.
Down on the beach the party was in full swing. Sea shanty singers from the village were entertaining people with their lively Cornish classics. The Children were now half naked covered in sand and people were tucking into their food boxes. Prepared by Nik's talented team Of friends and colleagues from The Hidden Hut and dished out by Charlotte and her team.
For those who would like to know: Each box contained 3 different flavour sandwiches, salmon, cheese and pickle and ham, with a home made scotch egg or polenta, mini caesar salad on a gem lettuce leaf, olives & crisps. This was a warm up for more food to come.

By now we were very much in the public sphere. Onlookers had even set up their deck chairs to soak up the atmosphere. My cousin managed to get a photo of me with someone wearing spear-fishing wetsuit walking past!

The tide was turning and naturally coaxed us off the beach at the perfect time.
We then lead the procession of merry guests up the hill to the Memorial Hall for our reception and for the last time, stopped traffic! 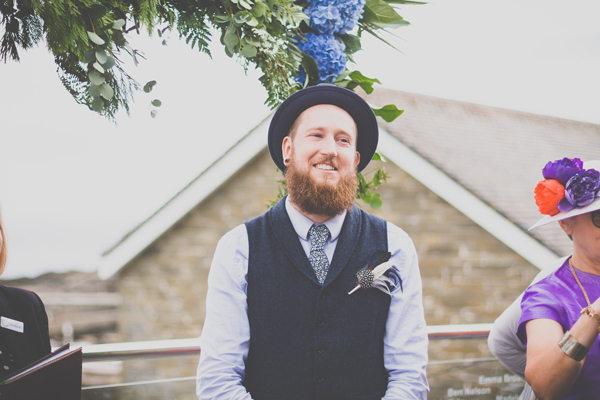 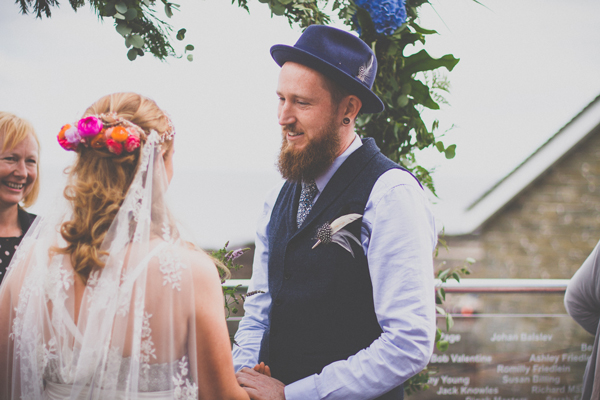 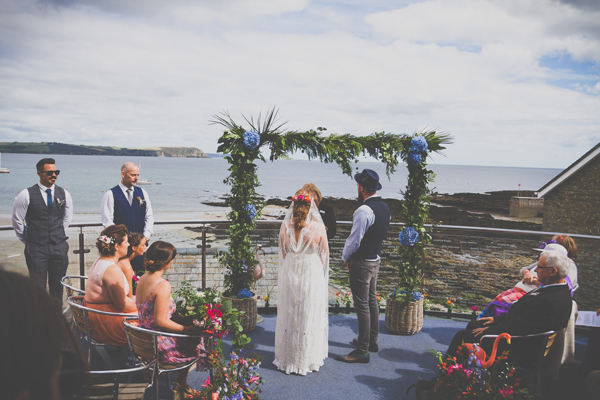 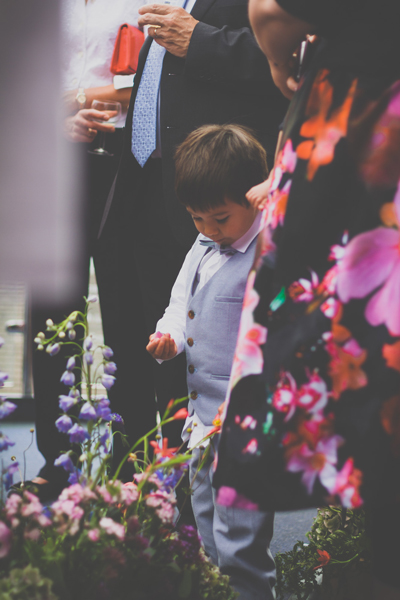 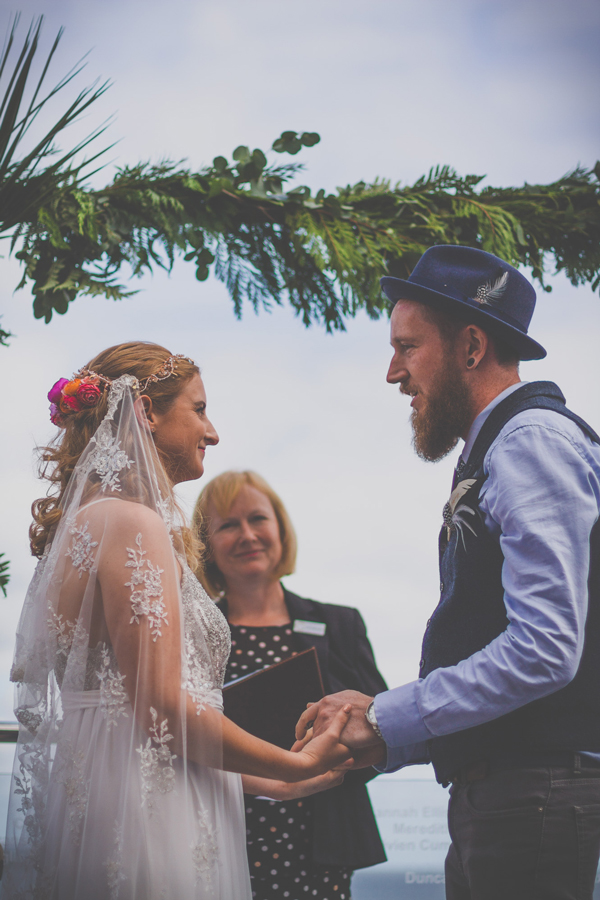 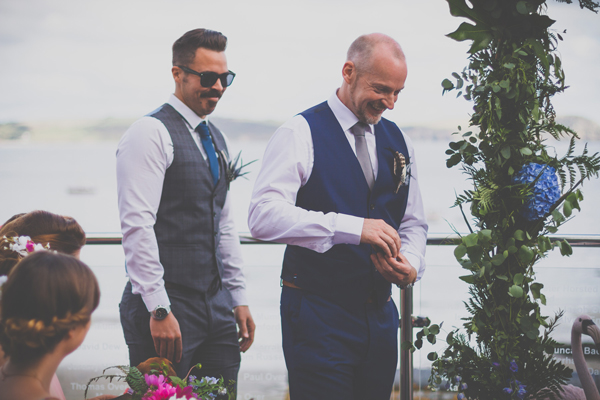 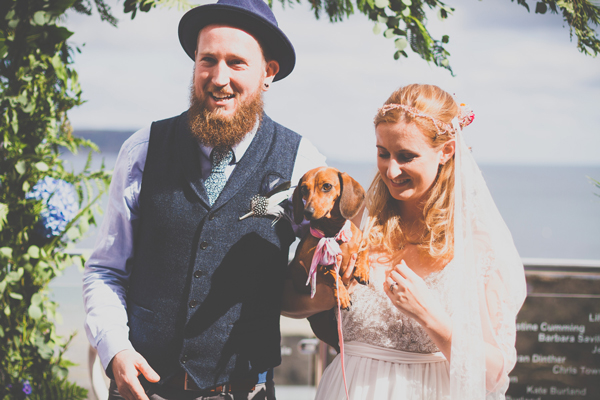 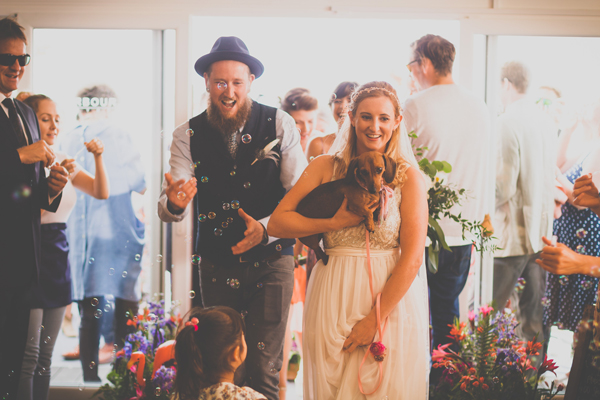 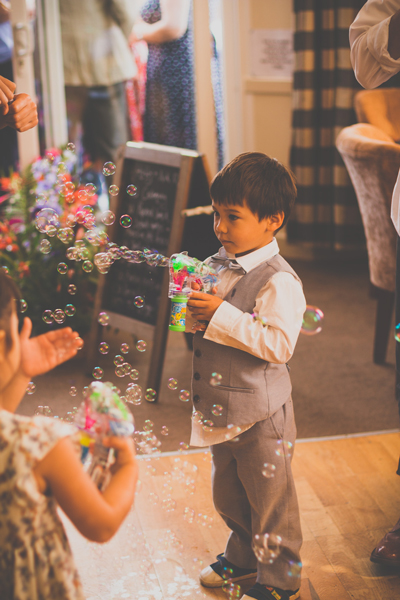 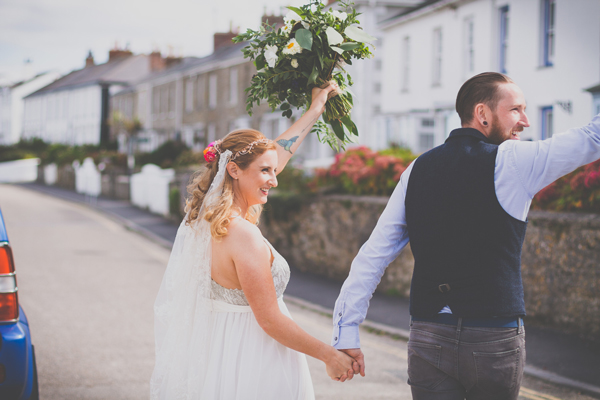 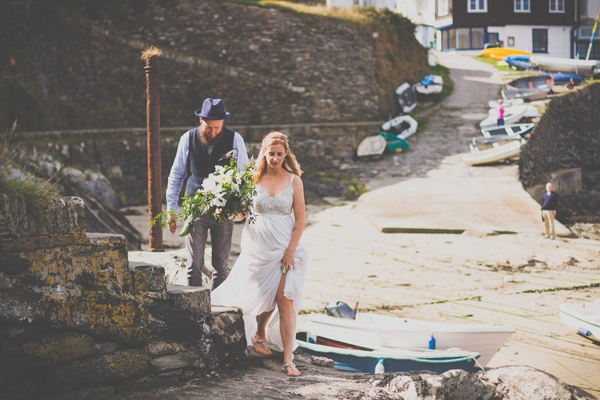 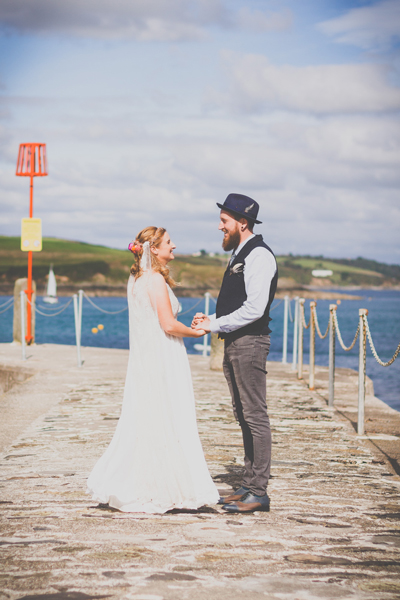 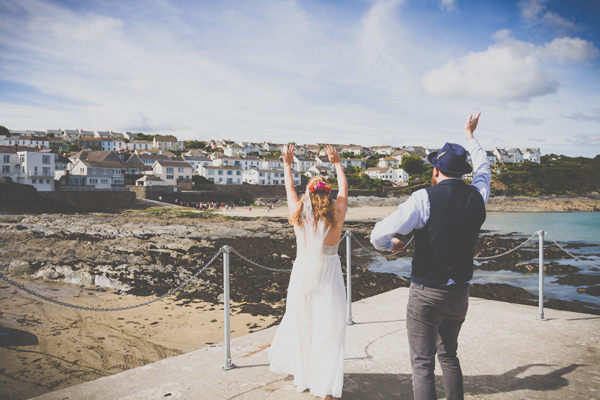 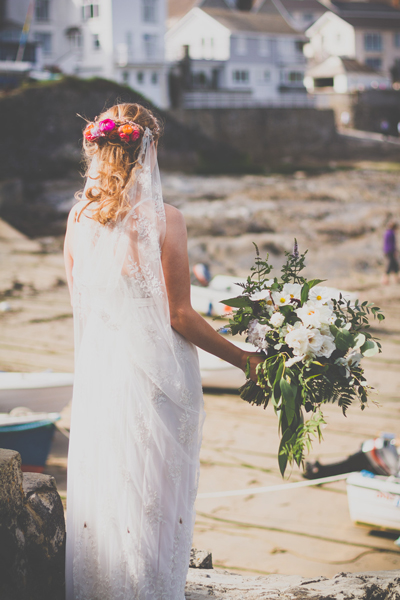 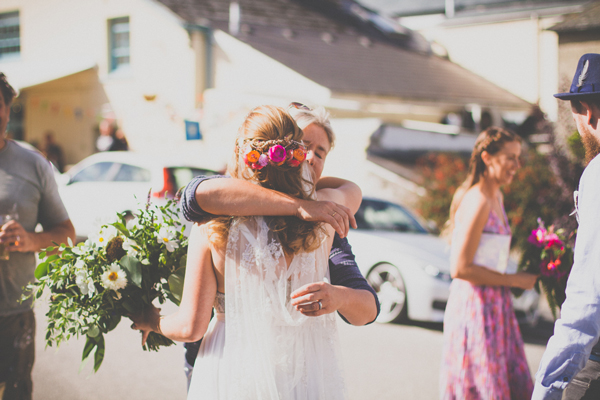 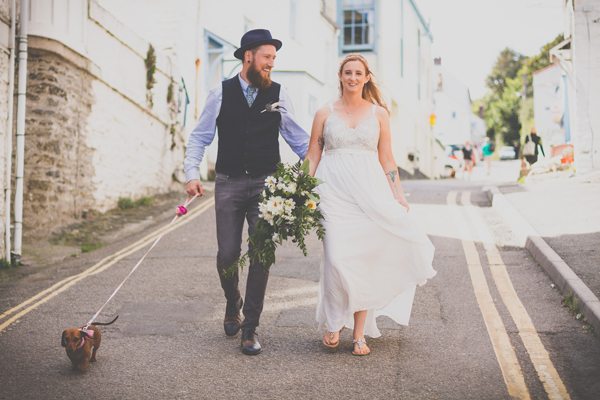 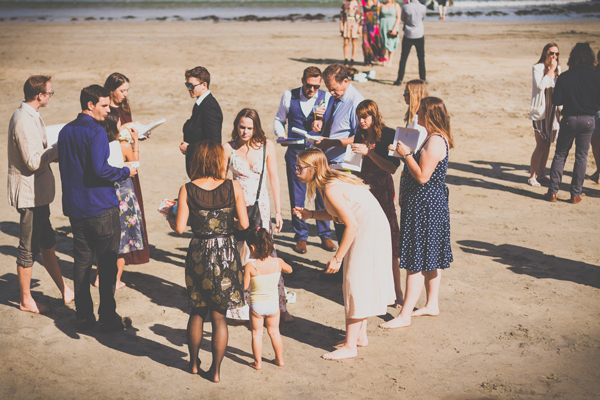 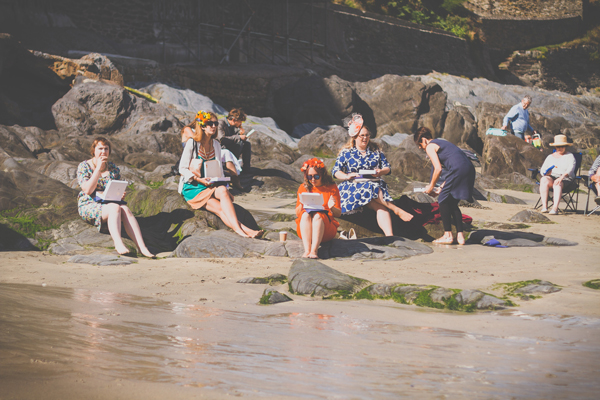 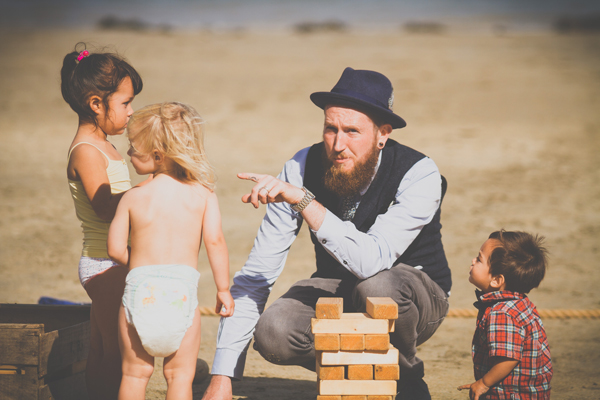 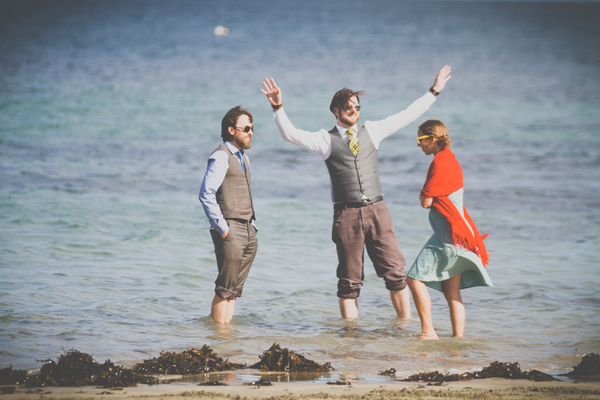 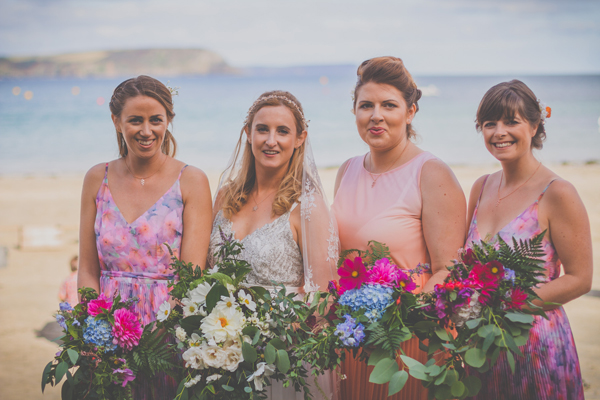 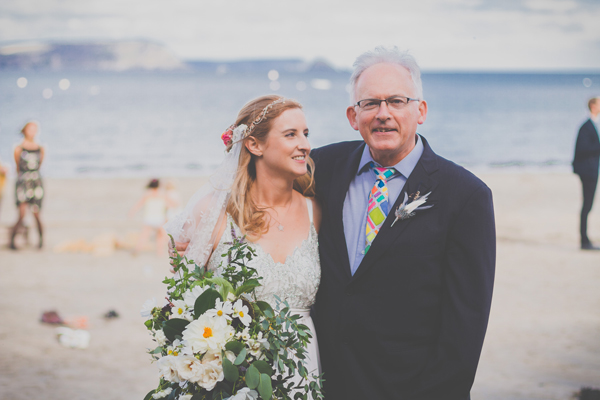 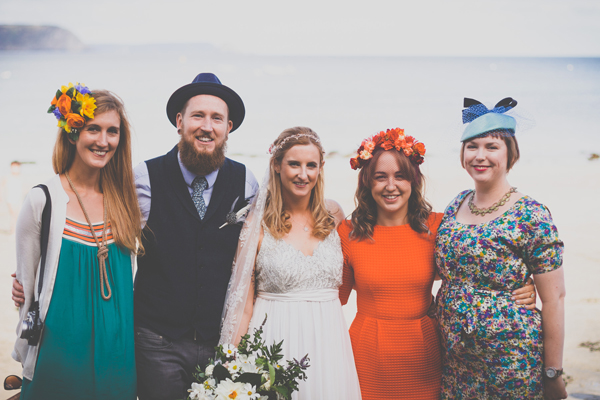 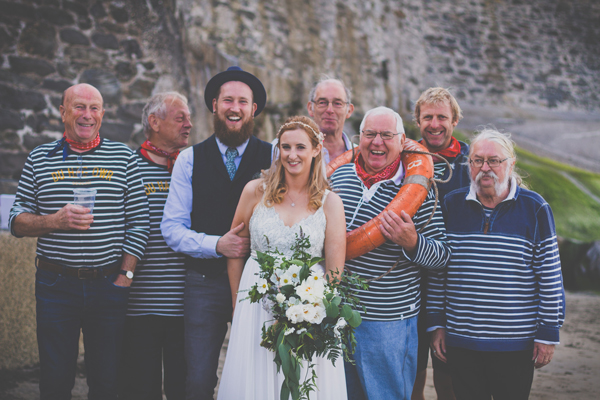 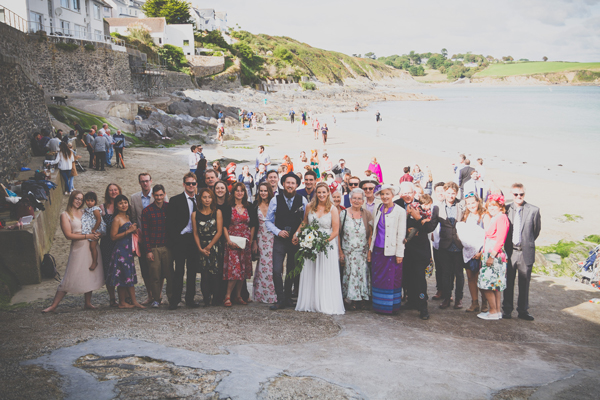 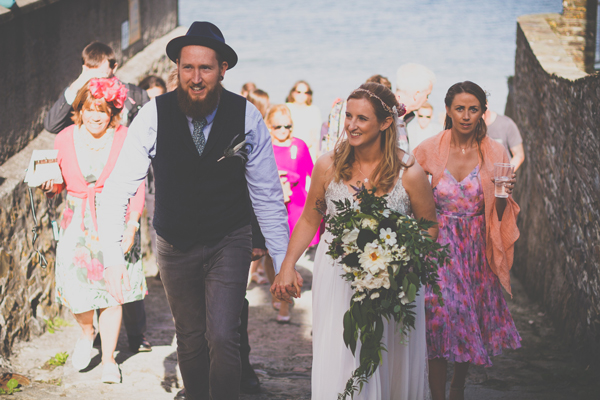 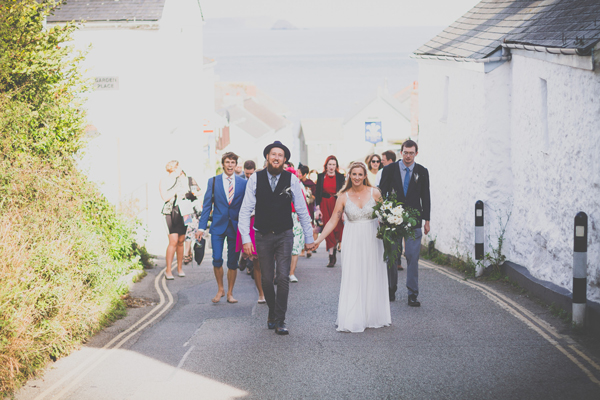